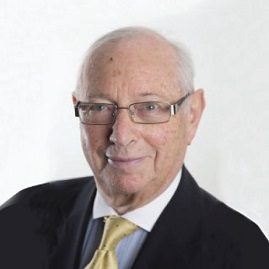 Sir Bernard has enjoyed a busy political career, serving as a senior member of Birmingham City Council, Sir Bernard led the team which developed the International Convention Centre and the world acclaimed Symphony Hall, home of the City of Birmingham Symphony Orchestra. He subsequently led the team placing the foundation blocks for the Midland’s millennium project, Millennium Point in Birmingham and served as Chairman of the Millennium Point Trust which hosts the exciting science and education project Thinktank and an expanding part of Birmingham City University.

He serves and has served as chairman of a number of companies including AQC Consulting Ltd, Advantage Business Angels, Cerebrum Partners Ltd, JWZ LLP, Lambton Tailoring, Rewired PR & CDI Group Ltd. He is also a former member of the Council of the Birmingham Chamber of Commerce and was formerly Chairman of a large NHS Hospital Trust.

He has experienced the world of theatre and entertainment having been Chairman of the Alexandra Theatre, a Director of the former BRMB radio station as well as being a current Trustee of the CBSO Benevolent Fund. He was the first Chairman of the Birmingham Convention and Visitor Bureau (now Marketing Birmingham), and served as Chairman of a range of local authority committees.

Sir Bernard is actively involved with a professional team in developing a major feature film inspired by his book HERZL’S JOURNEY expected to go into production next year.

His wide experience is completed with being a former Chairman of the Regional Committee of the Princess Royal Trust for Carers and former President of the Birmingham Hebrew Congregation. He is currently President of the Representative Council of Birmingham & Midlands Jewry, a Trustee of Birmingham Jewish Community Care and was for nine years a member of the Appeal Council of the National Memorial Arboretum at Alrewas in Staffordshire and a founder Patron of the Marie Curie Appeal for the new Hospice in Solihull. He served terms as Chairman and later, President of the Edgbaston Conservative Association.

When time permits, Sir Bernard enjoys coaching and supporting business managers and directors in improving their communication and presentation skills and building successful and effective business teams. Together with his wife he has become a student of bridge!

He is a proud old boy of King Edwards Grammar School Five Ways and served as a bomb disposal national serviceman in the RAOC.

Sir Bernard received the inaugural award from the Midlands’ Institute of Directors for “Non Executive Director of the Year” and was appointed chairman of the Design Panel to select the architects and design for New Street Station in Birmingham city centre now complete as part of the exciting Grand Central complex.

Sir Bernard was knighted for public and political services in the New Year’s Honours of 1996 and together with his wife, Cynthia is a Freeman of The City of London. He received an Hon LLD ( University of Birmingham ) in 1997 and an Hon DUniv (Birmingham City University ) in 2000.

Sir Bernard achieved one of his great achievements when he was elected Lord Mayor of Birmingham in 1990 and following that was elected Leader of the City Council Conservative Group.

He sees the real joy of life as his family, his wife Cynthia, their three married children and seven wonderful grandchildren.